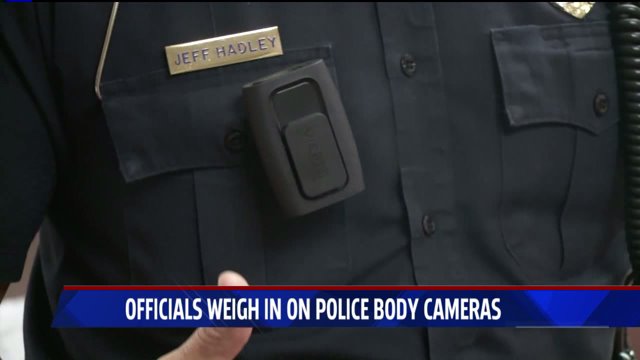 Kalamazoo is the latest city to try police body cameras in west Michigan.

KALAMAZOO, Mich. -- Law enforcement in Kalamazoo is testing body cameras on their officers as agencies across the state look at increasing transparency.

Kalamazoo is just the latest city to get the cameras here in west Michigan.

The Lowell Police Department has been using them since October, and the department's chief says that complaints from citizens have gone down during that time.

With Kalamazoo Public Safety testing out the cameras before actually purchasing the devices, a Grand Rapids defense attorney says that cameras help hold both the arresting officers and the suspect accountable.

Criminal defense attorney Ed Sternisha is a former police officer. and he knows first hand the pressure officers are under while filling out a report. Sternisha says that video cameras are a great way to accurately capture what really happens.

"It's hard to write a report and remember exactly what happened," says Sternisha, "and they can simply rewind and watch and then write it down. But you would be surprised at how many reports that I see, and read a report, and I watch the video, and they don't match up."

Kalamazoo Public Safety Director Jeff Hadley says that his department is testing out new body camera technology with hopes of buying them soon.

"You obviously have video evidence or video coverage, if you will, that can help capture things that you don't always capture in a written police report," says Hadley. "It can take away some of the he said-she said."

Sternisha says that most of his clients have been arrested for driving under the influence and that in those cases specifically--police video--helps defendants recall what happened. "It helps me explaining to my clients, 'Well this is really what happened,' and I show them the video, and they are more willing to accept the responsibility, because a lot of times they don't want that video shown to a jury either," says Sternisha.

In every case Sternisha investigates, he requests all recordings from law enforcement. While he said that sometimes the video is enough to convince his clients to take a plea deal, other times, he claims, clients have been found not guilty after a jury agreed there were discrepancies between the written report and the video.

As chief of the second largest police department in West Michigan, Hadley  hopes the public has more confidence in Kalamazoo officers with this new technology.

"I hope it will have an impact," Hadley says, "give the community greater confidence in public safety, that we are transparent, and kind of full disclosure as far as what we are doing with interactions with citizens."

If the Kalamazoo Public Safety Department buys the cameras after their test run, the devices will cost about $1,000 dollars a piece, and they would need as many as 100 of them.