Police use pepper spray on ‘Welcome Week’ crowds at WMU 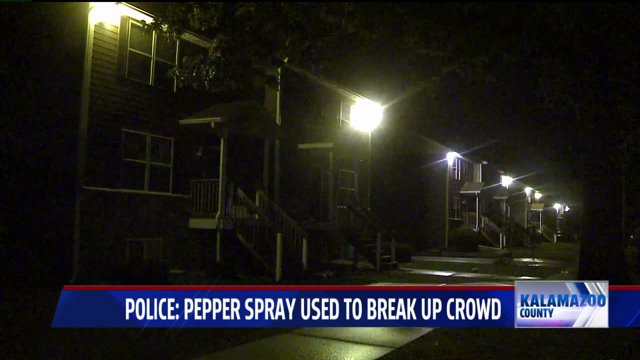 KALAMAZOO, Mich.— Police attempting to control crowds of students and party goers in Kalamazoo early Sunday morning deployed pepper spray on a group of about 300-400 people.

The crowds were gathering near West Michigan Ave. and Euclid Ave. during welcome week at Western Michigan University. According to police, they used pepper spray to control the out-of-hand crowds. No injuries have been reported.

FOX 17 found several posts on social media from students claiming police used tear gas on crowds, but police say that was not the case.

Sgt. Matt Schemenauer with Kalamazoo Public Safety said police only chose to deploy the pepper spray after several failed attempts to verbally break up the crowd and some individuals began pelting officers with bottles.

"The crowd was throwing rocks and bottles at officers, two officers were struck, there was also report of damage to a vehicle," said Sgt. Matt Schemenauer with Kalamazoo Public Safety.

The crowds dispersed relatively quickly after the pepper spray was deployed, according to Shemenauer.

"I don't know what happened," said Noah Lancucki who witnessed the ordeal. "We weren't doing anything wrong, honestly there were a lot of people but I really don't know what we did wrong."

KPS brought on an addition 6-8 officers for patrols for 'Welcome Week' in anticipation of the larger crowds and parties with students returning back to Western Michigan University's campus.

"You know it's not all the students, it's normally just a few that are acting up and causing problems, but we slowly escalated our response until it unfortunately gets to pepper spray," Schemenauer said.