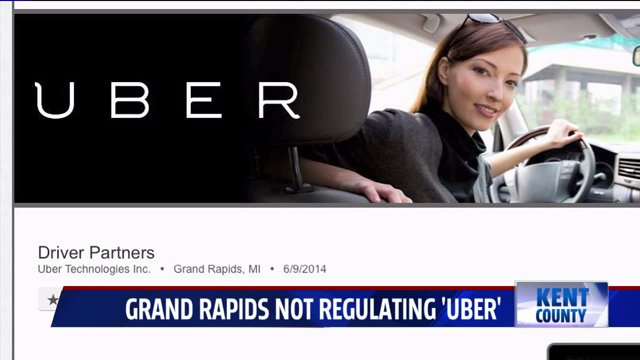 GRAND RAPIDS, Mich. -- The City of Grand Rapids announced on Monday that it will not regulate Uber drivers.

The company started offering service in Grand Rapids, Kalamazoo, Lansing and Flint at the end of July, but now Mayor Heartwell is saying that city leaders won't have anything to do with private vehicles picking up strangers for money.

Uber Technologies is company worth almost $20 billion, and has skyrocketed in about 140 cities in 40 different countries. The idea is simple. All you have to do is use their mobile app to arrange a cab ride. The only difference is that their drivers include regular people who aren't regulated by the City of Grand Rapids.

Tom Sinas at Sinas Dramis Law Firm said that the letter the City of Grand Rapids sent out on Monday is essentially stating that the city is waiting before making any decisions on how to regulate Uber drivers.

Sinas said that it's still to be determined how closely Uber monitors the insurance coverage of its drivers, as opposed to other cab companies that are licensed and regulated by the city.

Sinas also said that with the way Uber works, it could create an insurance conflict not typically seen in commercial situations.

"If you go to one of our college towns and you have a college student from Ohio and that college student got into a car with an Uber driver who was also from Ohio, that may present a scenario where if someone is injured in that accident, there's no no fault insurance coverage," said Sinas.

The City of Grand Rapids said that it will look to other cities, and compare how they have dealt with Uber branching into their communities, with their biggest concern being safety.

"The city is trying to take a step back and take a pause and try to evaluate if it's going to regulate, how should it do so smartly for today's technology?" said Sinas.

Calder City Taxi told FOX 17 that running a cab company that complies with the city ordinance is expensive, so they don't feel it's fair to allow Uber drivers to avoid the extra expenses with licensing.