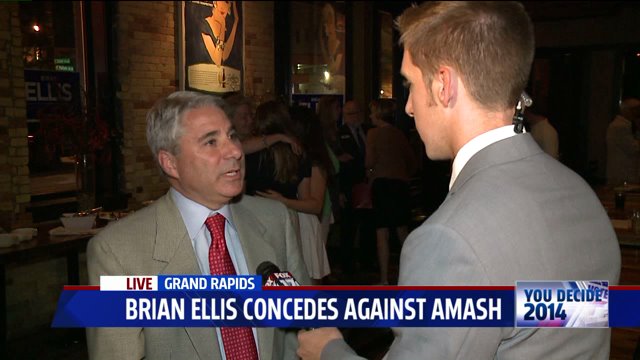 Ellis returned to his watch party around 10:30 p.m. to address the room of supporters and to say he called Amash to concede the race. He said the gap had become to wide to overcome.

Amash didn't take Ellis's call, letting it go to voice mail, according to Ellis. Later in the evening, across town at the Amash watch party, the congressman scoffed at the call, "You had the audacity to call me," he said, and demanded that Ellis apologize to his family.

In the face of defeat, Ellis said it was important to put the race in the past and unite as party. "A primary puts tension in the party," he said live on FOX 17 following his concession speech. "Justin (Amash) has won the nomination, and now we need to unite. He's the Republican nominee, and the Republicans need to support him."

Ellis was asked if he'd change anything about how he ran his campaign or targeted his message. "I haven't looked at it in that regard. I felt very good about every step along the way, and I've had a very cohesive team, " Ellis said. "We put our strategies in place, and I'm the one ultimately responsible, and I felt good about every move."