Boy, 9, stabbed by another child on a playground in Kentwood 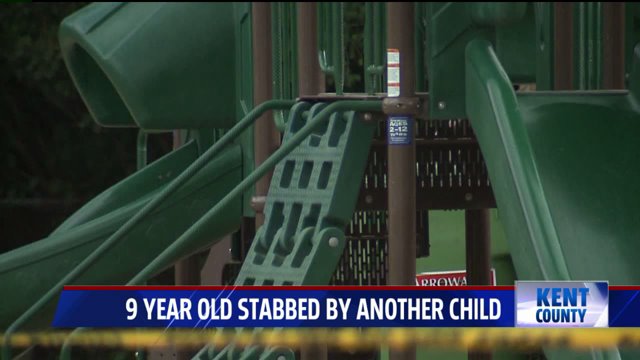 KENTWOOD, Mich. — Kentwood Police have confirmed to FOX 17 that a child has died after he was stabbed with a knife on Monday at the playground near Pinebrook Village mobile home park, 444 Bellewood Dr. SE.

Police said the 9-year-old victim was stabbed by another juvenile who is about 12 years old.  The victim was transported to the hospital in critical condition, where he later died.

A witness near the mobile home park tells FOX 17 that a child approached him and asked to use his phone because he had just stabbed someone.

"He approached me at my house, I offered him my phone and I assumed he was calling his mother," said Glen Stacy. "Lo and behold he was calling 9-1-1 to say 'I stabbed someone, please pick me up, I want to end my life.'"

Stacy said the boy was calm and cooperated with police when they arrived on scene.

"I calmly started doing what I normally do, I didn't want to agitate him and make sure he didn't run away and give time for the police to actually show up, but very calmly he stood there," he said.

That suspect has been taken into custody.

Police on scene say the 9-year-old victim was stabbed at least once in the back with a kitchen knife. Neighbors living across from the playground say they heard yelling and saw boys running away with one holding his back in pain.

"Initially it appears as if the two do not know each other or were acquaintances," Sgt. Robert Decker with Kentwood PD told reporters on scene. "We're not 100 percent certain but at this point we're still investigating that."

Decker adding the motive behind the stabbing is still unclear but the suspect doesn't appear to have any juvenile police record.

Stacy said the suspect told him he was upset because nobody loved him and mentioned he had taken multiple pills earlier in the day.

"It devastates me because I used to work with youth, so my heart really goes out to this kid and the victim…"