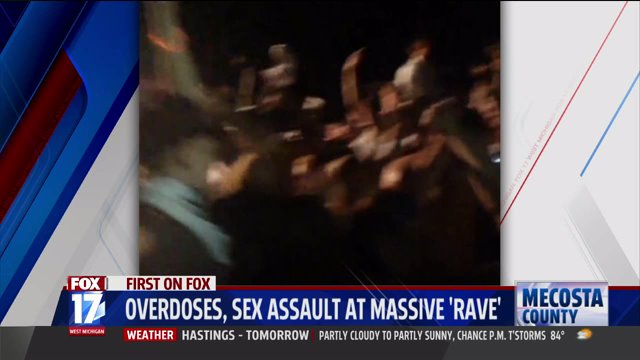 FOX 17s Josh Sidorowicz spoke with partygoers still on scene the morning after.

HINTON TOWNSHIP, Mich. — At a party police say was attended by more than 2,000 people overnight at a farm in Mecosta County, six people had to be hospitalized and one woman says she was sexually assaulted.

Deputies from the Mecosta County Sheriff's Office were dispatched to a traffic complaint due to cars parked in the roadway late Saturday night, which lead to the discovery of a large rave party at a Hinton Township residence located on 70th Avenue south of 5 Mile Road.

The crowd of more than 2,000 consisted mostly of people under the age of 21. EMS units from Mecosta and Montcalm County were on scene treating multiple alcohol patients and drug related injuries and overdoses. Individuals were sent to Kelsey Hospital in Lakeview, Mount Pleasant Hospital, and Spectrum Health in Big Rapids.

"It was insane," said Charrelle Dunston who was hired to dance at the party. "I’ve never seen so many people in like a gathering like that. It was amazing though."

Dunston said the party was no accident. It was organized through social media as a "Project X" type gathering, similar to a 2012 movie of the same name about teens who throw a massive house party using social media.

"It was all online on Facebook, they weren’t giving the address out til a couple hours before the party," said Dunston. "That way the cops couldn’t plan for it and try to stop it."

Jim Purdy noticed a large number of cars coming into the area Saturday afternoon. He lives about two miles away from the site but said he could hear the music and party loud and clear. "It was just a lot of boom boxes, a lot of music, people going back and forth. I figured there was a party somewhere, but I didn’t have any idea it’d be like this."

Deputies also  handled a report by a 19-year-old Mount Pleasant woman who reported being sexually assaulted in a vehicle during the party.

Police say  they are seeking multiple charges for the owner of the property and organizers of the event as the incident remains under investigation.

Invite sent out over social media to attend "Project P"